Most of family Harrison at the traditional Onesie Christmas morning walk with loads of other dog owners in festive attire in a bracing Wiltshire wind! 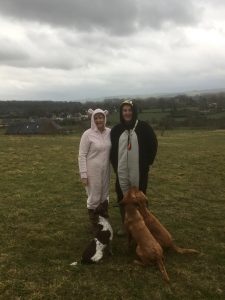 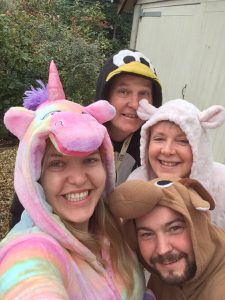 Have a peaceful and loving time.

Wilton Carnival 2012
It was a great privilege to witness Poppy and Stephen's gundog training display at our Fete in Newton Tony this year showing us all how it should be done. They made it all look so easy. I can safely say that I have never seen a gundog display as good as this – ever. Training tips, gundog skills, tricks – it had it all, everything explained in simple terms by Stephen as he went along. You could sense local dog owners watching with total admiration yet knowing their own dog would not even get off first base. Poppy clearly knows her stuff and was quite outstanding in demonstrating her skills and showing all the results of Stephen's expert tutelage.

What really stole the show was the amazing array of tricks that Stephen & Poppy perform together. It was so entertaining and breathtaking to see man and dog working in complete harmony. The audience loved it, the children in particular. It was certainly a great crowd puller. We really hope they will agree to come back next year"

Newton Tony Fete 2012
Over the years we have seen many dog training demonstrations but this was one of the best. Stephen’s style was so engaging and even though we are unlikely to ever go shooting we were inspired to get the clicker back out!
It was fun as well as instructive, if only we had a fraction of his skill, how happy would our cockapoo be!
Look forward to seeing him and his dogs again.

You were all fantastic today!!! Meerkat!! A really eye opening demonstration that gives me hope for our daft lab-collie haha thank you!!
Andrew on Facebook

Your gundog training display at Cranborne Chase Woodfair was so entertaining and informative. Your guide to foundation work for puppies was very clear and helpful but the highlight was Daisy and Poppy's intricate 'collar and sausage-stealing trick' which was amazing.
Thank you for the one-to-one help you gave us in your busy dog training clinic afterwards, to see our dog walking willingly to heel for you has inspired us to have lessons. Thank you.
Anne Filkins, Norridge Farm, Upton Scudamore

Our neighbours have seen you twice at country fairs & have raved about your techniques. Can you help us with our dog?
Pip Davidson, Wimborne

I saw Stephen and his Gundogs at Cranborne Chase wood fair, this past weekend. I was wandering around the demonstration area, trying to get my daughter off to sleep in her pushchair, when Stephen started his presentation.
We have a 7 month old Lab/Collie at home who just about sits, but mostly chews on whatever she can find, mainly us. Hands, jumpers, hair, you name it, she is all over it!
Anyway, when I heard Stephen say that all that you need are three things, he grabbed my attention straight away. Although he had use of the entire arena, Stephen showed that you only need a relatively small area, the size of a small front garden, in which to teach your dogs the basic skills set, before opening up the area for more adventurous activities.
Stephen has a very engaging voice and his character is such that even a new dog owner is drawn to a demonstration that is as seemingly effortless as it is entertaining.
Both the dogs Stephen used were fantastic characters in their own right and certainly, during the second part of his demonstration, this was allowed to shine through in Stephen's demonstration of party tricks (MEERKAT)!!
All in all, Stephen has inspired me to try and have a go at training our little beastie at a few of the less adventurous of the activities. Maybe walking to heel, but I am not holding my breath!
After the demonstration, Stephen took the time to chat to as many festival goers as he could, with their dogs and give free advice and tips.
I highly recommend seeing Stephen, if you get the chance, as he is, without a doubt a fantastic crowd pleaser even before you add in the charm of his gorgeous dogs!!
Andrew Predeth, Oborne, Dorset.