Daisy recovers from her foot injury and then …….. 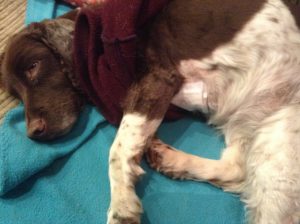 Now it’s Poppy’s turn. A deep rip into her stomach cavity caused by jumping through a barbed wire fence during a day’s shooting. A trip to the emergency out of hours vet on Saturday evening (£ hundreds just to have an appointment before any treatment!), back to the vet tomorrow for more surgery and then off games for a long time.

To round off a really crappy month, Daisy then goes lame in her right leg on the same afternoon, so soon after her last injury.

We’ve been so unlucky this season. More injuries than in an episode of Grey’s Anatomy. If it wasn’t so painful (and expensive), it’d be funny. Perhaps we should take up tiddly winks instead. 😟

Wilton Carnival 2012
Dear Stephen
Many thanks for coming to our Fete: the feed back has been marvellous, you were just wonderful!
My husband said that you were the Star of the Show. You inspired the Secretary's Grandchildren to do their own Dog show in the arena!
Many thanks for coming.
Best wishes from Debby
Debby Underhill - Fete Organiser

Dear Stephen,
I should  like to congratulate you on the show that you put on. It was both very entertaining and educational. Perhaps I should praise your dogs more so given the faultless performances they gave. They really are a credit to you and your training methods.
I'm very grateful for the fact that after the show you devoted so much time to patiently answering my questions on training. In particular your demonstration on dealing with lead pulling which already is having very positive results.
I look forward to seeing your demonstration again and have made a note of the Wessex Country Fair in my diary.
Regards, Steve Whitfield

Nunton Fete - 9 July 2016
"Superb! I can honestly say that this was the most entertaining thing I have ever witnessed! You had the whole crowd, old and young, transfixed!"
Pam Kent, Chitterne

2 August 2014 - Jack's Jamboree Fundraiser, Codford
Over the years we have seen many dog training demonstrations but this was one of the best. Stephen’s style was so engaging and even though we are unlikely to ever go shooting we were inspired to get the clicker back out!
It was fun as well as instructive, if only we had a fraction of his skill, how happy would our cockapoo be!
Look forward to seeing him and his dogs again.