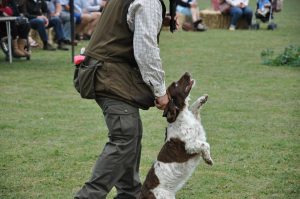 And we’re off, up and running with this year’s show season, starting on Sunday 18 June at the Evershot Country Fair in the heart of Hardy country in the beautiful Dorset countryside.

In its five years, Evershot Country Fair has emerged as one of the best attended and premier country shows in the south west and I know that the organisers are hoping for another record turn out.

Our main demonstration is at 2pm and, in addition, we’re running free training clinics for all dog owners at 11:30 and 3:15.

I am going to be helped once again by a loyal band of supporters and dog trainers without whom I could not manage. Foremost amongst these will be Kim with her dogs, including the adorable 6 month old Vizsla, Parsnip, making her arena debut!

We’ve started rehearsing our routine and have quickly discovered that we are going to have to cull about 10 minutes of material to make sure we don’t overrun! But the emphasis will, as always, still be on entertainment and education rather than showing off advanced gundog skills.

We’re a little nervous, as usual. But I’m sure it’ll all be ok. Hope to see as many people as possible, not just on the 18th, but at all of this year’s shows. 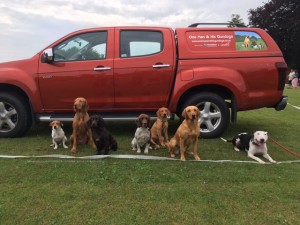 It was good to meet you this afternoon and to see your superb dog demonstration and to get advice on wayward spaniels!  Good to meet you and I look forward to meeting again.

Samantha Male, the Regional Coordinator at Help for Heroes, wrote:

Thank you so much for attending our first ever Band of Brothers and Band of Sisters summer fete. Your gun dog show was fantastic, and I am so glad that you could be a part of the day.

Ali Richmond, a Manager at Help for Heroes, wrote:

Thank you so much for coming along to the Fete at Tedworth House.  The dog display was fantastic and we have had some great feedback.  I have got a large hairy golden doodle that could do with some of your magic touch!

I have witnessed dozens of gundog demonstrations in the 40 years I have been involved with Gundog displays. But yours was the most entertaining and informative display of man and dog working together that I have ever seen! Just brilliant!


It was clear that the dogs were clearly enjoying what they were doing (not always the case in some demonstrations) and you were informative on what you were asking the dogs to do and informing the public of this. I thought the range of tricks your dogs performed was stunning!

This is the second time Salisbury City Council have used Stephen and the Gundog display at one of our family events and we are always delighted with the show which is educational, informative and fun for our audience. We would not hesitate to use the show as part of a future event.

Fans of “Britain’s Got Talent” will have seen the dog “Pudsey” win the show and with it, £500,000 doing tricks like walking on his owner Ashleigh’s feet, walking on his hind legs, albeit flawlessly to music. Poppy did all this and more, including balancing a sausage on her nose until being allowed to eat it and carrying another sausage to her master, also uneaten.