A warm day at Newton Tony today – what a lovely venue with such welcoming and pleasant people. Jo Cadzow and Simon Hunt put on a really well organised day and were fantastic hosts to Andrea and me. It was a real joy to appear here again. The dogs performed well although, once again, Poppy was not on top form, deciding to eat the sausage instead of retrieving it (she did it here last year too!) and doing a few other totally uncharacteristic things, which probably passed unnoticed by most. In addition, both  dogs were affected by the heat and lacked the usual energy levels. Despite this, our performance met with warm applause and attracted many lovely comments afterwards. For me, Daisy was the star, performing just beautifully, not only showing off her basic obedience skills but her gundog abilities as well – I’m so proud of her talents at such a young age.

Had a really interesting cross section of questions afterwards, ranging from a couple whose collie bites them regularly (with recent scars to prove it!) to someone who said “How do I stop dogs barking?”. It was only after I had been speaking for a minute or two that he said “Oh no, they’re not mine, they belong to my neighbours and they’re getting on my t**s!”.

Met some really interesting people afterwards, including Mike who was showing his Harris Hawks and his owl. We got chatting and I mentioned I had always wanted to work a spaniel with a Harris Hawk- and it’s going to happen! He’s invited me up to Pewsey and, in exchange for some help with his pointer and cocker, he and I are going to work dogs, ferrets and birds together against the rabbits once the harvest is in. Can’t wait. An idea for future shows perhaps ….?

Bit of a break now until our next appearance in our home village of Codford on 7 September followed by Warminster Carnival the very next day. Time to regroup – and reducate Poppy, in particular. But now that I have received most of the shooting dates for next season, the truth is that I’m now looking forward to finishing the show season and swopping canvas dummies for a bit of feather and fur! 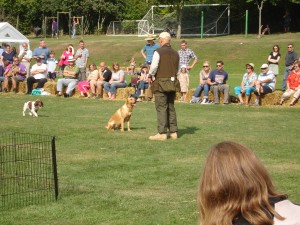 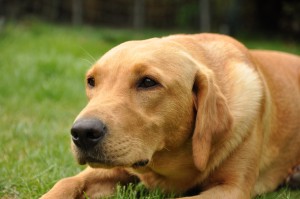 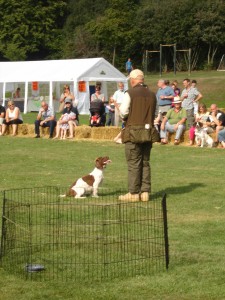 I have witnessed dozens of gundog demonstrations in the 40 years I have been involved with Gundog displays. But yours was the most entertaining and informative display of man and dog working together that I have ever seen! Just brilliant!


It was clear that the dogs were clearly enjoying what they were doing (not always the case in some demonstrations) and you were informative on what you were asking the dogs to do and informing the public of this. I thought the range of tricks your dogs performed was stunning!

16 August 2014 - Wessex Country Fair
I was lucky enough to watch One Man and his Gundogs at The Wessex Country Fair recently and even luckier to chat with him after the demonstration. On mentioning writing a review of his demonstration, Stephen, tongue in cheek, informed me of the correct spellings for some adjectives I might need for the review-

Lorraine Taylor
Over the years we have seen many dog training demonstrations but this was one of the best. Stephen’s style was so engaging and even though we are unlikely to ever go shooting we were inspired to get the clicker back out!
It was fun as well as instructive, if only we had a fraction of his skill, how happy would our cockapoo be!
Look forward to seeing him and his dogs again.

6 October 2013 - Cranborne Chase Woodfair
“Stephen provides such an enthralling and thoroughly engaging display of dog/owner training that we’d have Stephen back at any future event – no question!

No matter how many times I’ve seen Stephen and his wonderful dogs in the ring, I’d watch him over and over as there’s always something to learn - or remind yourself again that you’re not doing!

On a personal note, both my collies (& myself) are so much happier having taken on board his very practical advice, given in a very straightforward and practical way. It’s great fun too! Look forward to see Stephen back at the Cranborne Chase Woodfair next time around!”