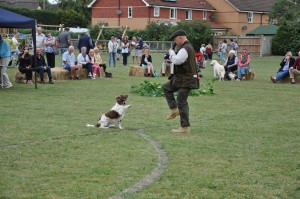 The weather forecast was terrible for Saturday 7 June and this may have caused the low turnout at the Maiden Bradley Fete. In the end, the sun shone throughout!

It was not ideal that we had to compete with the fun dog show in the side arena on the other side of the field which, quite understandably, attracted many of the dog owners away from the main arena.

Nevertheless, we cracked on under a blazing sun! I used a head mic for the first time: the speakers were about 75 yards away. This meant that there was a delay between me speaking and hearing my own voice – very off-putting. It was a case of trying to blank out what I was hearing and just getting on with the commentary.

It all turned out OK, Poppy’s exhaustion in the heat led to a refusal to do the saluting trick – for which she was put on a charge! Otherwise, as always, the tricks went down well with a growing crowd.

His Grace The Duke of Somerset expressed his appreciation – that’s more than good enough for me!

Help for Heroes on Thursday 12 June at Mullenscote Gundogs is the next show. Hope it’s not too hot …….


"Highlight of the day was Stephen Harrison's demonstration of dog training methods, gundog skills and tricks - with the help of Springer Spaniel Poppy and Labrador puppy Daisy.

He showed basic dog training techniques and also how gundogs hunt and retrieve.

The most popular part of the 30 minute show was a fun display of tricks by Poppy worthy of Britain's Got Talent's Pudsey. She balanced a sausage on her nose, danced, walked backwards, walked on Stephen's toes, did meerkat impressions, saluted and won everyone's heart".

Warminster Carnival 2013
I was lucky enough to watch One Man and his Gundogs at The Wessex Country Fair recently and even luckier to chat with him after the demonstration. On mentioning writing a review of his demonstration, Stephen, tongue in cheek, informed me of the correct spellings for some adjectives I might need for the review-

This was the first time I have seen your display and I have to say that the show was a fantastic day for both owners and dogs alike . Not only did you do your brilliant display, but you did all the judging for the dog show too.

It was amazing and, along with the other spectators, I was blown away by your performance, with the highlight being Daisy's collar act!

Dear Stephen, You were brilliant! It was tough on you to judge every class and run commentary - and THEN do your turn! You and the dogs were very well received, all the folk around me were in awe of you and your girls. Wowed and amused in all the right places. For me it was a chance to see where my piece of the jigsaw might eventually fit into the bigger picture. The show was a great success, largely thanks to you.

7 June 2015 - Sutton Veny Dog Show
It was a great privilege to witness Poppy and Stephen's gundog training display at our Fete in Newton Tony this year showing us all how it should be done. They made it all look so easy. I can safely say that I have never seen a gundog display as good as this – ever. Training tips, gundog skills, tricks – it had it all, everything explained in simple terms by Stephen as he went along. You could sense local dog owners watching with total admiration yet knowing their own dog would not even get off first base. Poppy clearly knows her stuff and was quite outstanding in demonstrating her skills and showing all the results of Stephen's expert tutelage.

What really stole the show was the amazing array of tricks that Stephen & Poppy perform together. It was so entertaining and breathtaking to see man and dog working in complete harmony. The audience loved it, the children in particular. It was certainly a great crowd puller. We really hope they will agree to come back next year"