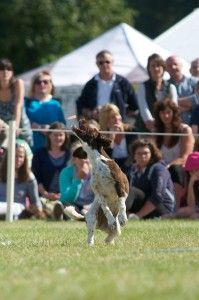 And so, with the Wessex Heavy Horse Show behind us, we can draw a veil over another year of demonstrations and shows. Glorious weather in Shaftesbury on Sunday at a quintessentially English country fair. Great fun.

Verdict for 2014? As always, some good events, some not so good. But overall, I’m very happy with the dogs’ performances this year. Daisy has come on leaps and bounds and has emerged as a strong, well-behaved Gundog, a firm favourite with the punters. But she’ll be over two by the time next year’s shows roll around, so we won’t be able to use her in any “puppy” training sequences again. Note to self: get another pup in 2015!

As for Poppy, she just did her stuff without too much exuberance: she’s clearly a very clever little dog who is, quite frankly, bored with doing tricks and just wants to get amongst the real fur and feather.

The biggest lesson I’ve learned? Sadly, it’s that many people for whom I give up my time free of charge don’t have the good grace to even say thank you. A sign of the times, perhaps? I hope not.

So the hoops, poles, collars, bolting rabbits, PA system and all the other show paraphernalia are tucked away until next year when we’ll take stock and see how many, if any, shows we’ll take on. In the meantime, as we used to say in the Army, I’m going to “minimise on this means” and just enjoy the shooting season with my dogs.

Steve put on a very entertaining and informative display recently at the Ellingham & Ringwood Show. All aspects of dog training were demonstrated, from the very first actions with your brand new puppy to the high levels of training expected of more experienced dogs that are ready to go into the shooting field. Added to these elements were some of Steve's special tricks showing that dog training can be fun. The crowd around us certainly enjoyed watching the display as much as we did; there was something for every person at the show ground to enjoy.

If you are ever able to watch one of Steve's displays we would highly recommend you do so; it's guaranteed that you will enjoy it and there are always plenty of tips and advice to take home with you. It will certainly be different to any other display you are ever likely to see.

8 August 2015 - Ellingham & Ringwood Show
“Stephen provides such an enthralling and thoroughly engaging display of dog/owner training that we’d have Stephen back at any future event – no question!

No matter how many times I’ve seen Stephen and his wonderful dogs in the ring, I’d watch him over and over as there’s always something to learn - or remind yourself again that you’re not doing!

On a personal note, both my collies (& myself) are so much happier having taken on board his very practical advice, given in a very straightforward and practical way. It’s great fun too! Look forward to see Stephen back at the Cranborne Chase Woodfair next time around!”

16 August 2014 - Wessex Country Fair
Over the years we have seen many dog training demonstrations but this was one of the best. Stephen’s style was so engaging and even though we are unlikely to ever go shooting we were inspired to get the clicker back out!
It was fun as well as instructive, if only we had a fraction of his skill, how happy would our cockapoo be!
Look forward to seeing him and his dogs again.